"Inskip Peninsula"
Along the "Bird Trails of Cooloola" 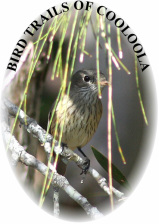 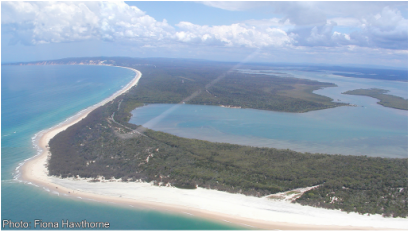 From 1965 until 1976, areas of Inskip Peninsula, (more often referred to as Inskip Point), were subject to sand mining for Rutile, Zircon and Ilmenite.

Upon cessation of this activity, rehabilitation of mining affected areas was undertaken with planting of native vegetation.

Today, Inskip Peninsula is widely  recognised and appreciated by many as a great place to “get away from it all” for a camping holiday.

It is equally well  recognised as one of the best “Birding” sites in South-east Queensland.

(The following information is with acknowledgements to
“The Department of National Parks, Recreation, Sport and Racing”)

It contains land which is Reserve and State land tenure, managed by “The Department of National Parks, Recreation, Sport and Racing” (NPRSR).

Although the Inskip Peninsula Recreation Area is only 459 ha, its’ natural values are wide ranging.

Its’ unique aesthetic qualities provide a surf beach to the east, the calm waters of the Great Sandy Strait to the west and largely uninterrupted
views to Fraser Island.

This vegetation provides habitat for a variety of animals including 112 bird species.

Rare and threatened species inhabit the area, which is also a roosting site for migratory shorebirds protected under international conventions.

Studies have identified a number of migratory bird species which use the intertidal sandbanks for feeding and roosting during their stay
in Australia from September to April each year.

In March–April the birds migrate to Siberia to breed, returning to Australia in September–October.

The time they spend in Australia is essential to build their energy reserves so they are healthy enough to continue their journey north each year.

If disturbed during this time the risk of the birds not surviving their journey increases.

Inskip Point is a significant habitat for the endangered black-breasted button-quail and the vulnerable beach stone-curlew.

The wetlands of Inskip Peninsula and the Great Sandy Straits are of international significance, listed under the Convention of
Wetlands agreement  (Ramsar).”

Click on the link below for more information on Inskip Peninsula

For more information on the Wonders of our Migratory Shorebirds, visit the following -

“Shorebirds and Seabirds of the Cooloola Coast”

Wish to stay at Inskip?

Click on the links below for further information on Inskip Peninsula

Inskip Peninsula offers the best of “Bush & Beach” for Birders

Watch for Variegated & Red-backed Fairy-wren in the grasses and low vegetation at the car park entrance to the walking track.

Watch for Eastern Whipbird, White-browed & Large-billed Scrub-wren, (among others), feeding on the forest floor  as you walk the tracks.

You may even  see a Noisy Pitta!

Watch too for Inskip Peninsulas’ “signature” Bird species, the Black-breasted Button-quail, as it scurries through the undergrowth!

(Look for their Platelets on the forest floor; these are shallow depressions created while they are feeding)

While the Inskip forest canopy is home to a great variety of Honeyeaters & many more Bush Bird species, the shoreline is only a few short steps away,
offering Birders a wide range of sea & shore frequenting birds, including migratory & resident Tern & Shorebird species.

Members of Birds Queensland have conducted regular February surveys of Inskip Peninsula Birds over 10 years,
from 2002 to 2011.

(Click here to Refer Map in “Take the Bird Trails of Cooloola!”)

Please drive according to conditions on all “Bird Trails of Cooloola”

For a Digital Map to “Inskip Peninsula” – Click Here

Habitat Type (As per Regional Ecosystem (RE) Data) –

RE 12.2.7 - Melaleuca quinquenervia or M. viridiflora open forest to woodland on sand plains

RE 12.1.3 - Mangrove shrubland to low closed forest on marine clay plains and estuaries

RE 12.1.2 - Saltpan vegetation including grassland and herbland on marine clay plains

Points to Note for your Safety – Sunscreen & Insect Repellant are recommended, as are appropriate protective footwear if venturing to the Tidal Flats.

What to expect of your Excursion – Inskip Peninsula offers the best of Bush & Beach for Birdwatchers!

Experience easy walking through low forest that is home to a surprising array of Bushbirds.

The beach at any time is only a few steps  away, presenting the perfect opportunity to add Birds of the “Sea & Shore” to your list.

At low tide from September to April, migratory Shorebirds are “easy pickings” for Binoculars & Telescope while they are feeding on the shore & Tidal Flats.

The small sand island a short distance from the Peninsula tip is an important Roost for Migratory Shorebirds & Terns.

Among the variety of Bird Species you may encounter are –

(Note – Surveying conditions and Bird Species as described are accurate at time of compilation; these may vary over time with
the influence of climate and other factors)

Click on Ruth to “Fly” you to “Inskip Peninsula”